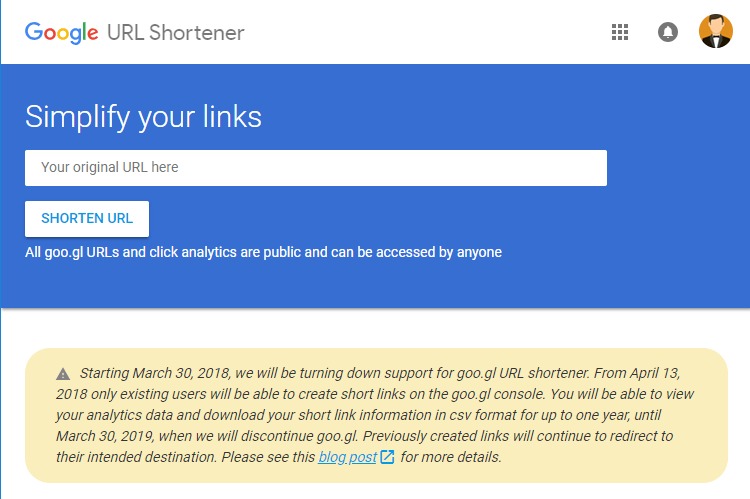 Google announced that it decided to abandon the notion of shortening URLs in Chrome. This statement was given this month in the Chronum project’s bug database. Software Engineer at Google Emily Stark said that the experiment did not meet security metrics, and they have decided not to launch it.

If you regularly use goo.gl to monitor and shorten your links, you must already know this. Google decided to discontinue this service from 2021. It was finalized in 2020, and since then, registration for new users was removed. Current users were allowed to use this service for a year, but now Google officially closed goo.gl. Users will have to find an alternative service from now onwards.

However, Google already has a replacement for their old URL shortener. Firebase Dynamic Links, FDL for short, will replace goo.gl. Google decided to move to FDL after the way of sharing information online changed. The technology giant prefers to keep up with any kind of change. These ‘smart URLs’ are expected to redirect users in more ways than possible in 2009.

In its declaration, Google engineers said they would run trails with Chrome users who hide their site’s URL. This idea was put into action to stop phishing attacks. The engineer explained, “Our goal is to understand — through real-world usage — whether showing URLs this way helps users realize they’re visiting a malicious website and protects them from phishing and social engineering attacks.”

Google began the trials with Chrome 86, which was released in October 2020. One of the engineers working on the Firebase software Michael Hermanto said, “We launched the Google URL Shortener back in 2009 as a way to help people more easily share links and measure traffic online. Since then, many popular URL shortening services have emerged, and the ways people find content on the Internet have also changed dramatically, from primarily desktop webpages to apps, mobile devices, home assistants, and more.”

Google’s URL shortening service only showed the core website name instead of the full webpage address. Google believed then it would reduce phishing as hackers use long URLs to impersonate other web pages. In addition, shortening the URL to its registered domain name would help in spotting fake pages quickly.

This modification was met with some anger from certain users who struggled with the new UI change. Launched on 25th May, Chrome 91 comes without the option of URL shortening, but the browser has dropped HTTPS:// from the URL. However, browsers like Safari are still using short domain-only URLs. Edge, on the other hand, never introduced shortening of URLs and continues to show full-length web addresses with HTTPS://.

Coming back to Google’s Dynamic Links, users will avail themselves the best experience on the platform they open links on. For example, if the user opens a Dynamic-link on Android or iOS, they will be taken to the linked content on your native app. Similarly, If the users open the same link on a desktop browser, it will take them to the equivalent content on the website.

If you are still skeptical about using FDL, there are several Edge On URL shortening services available. Google has recommended Bitly and Ow.ly as perfect replacements for goo.gl. Bitly is an American-based URL shortening service. This company crunches around 600 million links every month. It gives world-class link management for a paid version but also has primary free access.

Ow.ly is a user-friendly URL shortener available all over the world. At present, it is part of the Hootsuite dashboard. It shortens links based on the best SEO practices and allows users to control who can access the link shortening tool. In addition, Google’s Safe Browsing blacklist is used to verify the links to avoid malware. The free version of Hootsuite gives users full access to Ow.ly. However, the paid version has several professional features that will aid users in keeping better track of their web pages.

← Prev: Scientists Develop Highly Maneuverable Miniature Robots Next: Windows 11: Everything To Know About The Leak And Launch of Microsoft’s New OS →